I need to tell you about the blast I had at the Great London Yarn Crawl a couple of weeks ago, but today’s post is about my trials with knitting a pair of Belyse gloves (I bought a kit for these at the Edinburgh Yarn Festival back in March). Oh my god, these gloves, they have almost been my undoing. I’m one down, and it has been  knit past the thumb not once or twice but a solid three times – AND, the cuff has been completely reworked this weekend. I just could not get these to work! I started on 3.25mm square DPNs and realised halfway through the palm that the fingers were slightly too tight (never a good thing). So I ripped back, upped the size to 3.5mm DPNs (normal ones) and.. realised it was coming out way too big. So then I decided to try 3.25mm non-square DPNs and… the size is OK?

The thing is, these are knitted from the fingers down (each finger plus the thumb is knitted individually before being joined together for the main part of the hand). The approach to the fingers is a version of i-cord, which is certainly original but, turns out, not my favourite thing. It doesn’t take a dedication to maths to work out that, after three starts, I’ve already knitted 12 fingers and three thumbs. And I still have a second glove to go. Ugh.

So, a few false starts, and then yesterday I’d finished the first glove. Hooray! Except… it was clumsy. Argh! The cuff was huge around my wrist and that bothered me – it was more like a gauntlet. My gauge on these is, if anything, slightly too tight so it’s not that – the gloves are just designed to not be fitted around the wrist. Which to me feels all wrong.

So I ripped them out immediately and decided to lose some stitches and try a totally new cuff. I reduced down an inch’s worth of stitches at a point in the pattern which allowed that (row 34, for anyone interested – I reduced 8 stitches evenly across that row), roughly followed the pattern as set (minus those stitches) up to row 41, and then abandoned the pattern altogether in favour of corrugated rib for the cuff.

And here we go – a MUCH better fit and I really like the way it now nips in under the palm (I know I have fairly slender wrists, but I can’t imagine all that many people whose wrists are the same width as their hand…). If I were into self-flagellation I might rip these out once again and knit the main bit of the hand on the 3.25mm square DPNs again, because the palm doesn’t have the negative ease I’d like, but bloody hell, no, I can’t face it. Plus these are going to be a Christmas gift anyway and what fits my hand perfectly might not fit the recipient, so I’m ploughing ahead with the second one. Should said recipient be reading this (and only realise that when they open their present at Christmas) – be assured that a lot of work and swearing has gone into these! 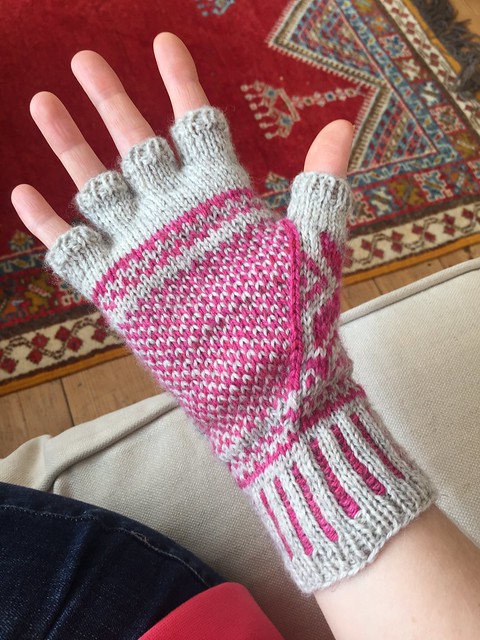 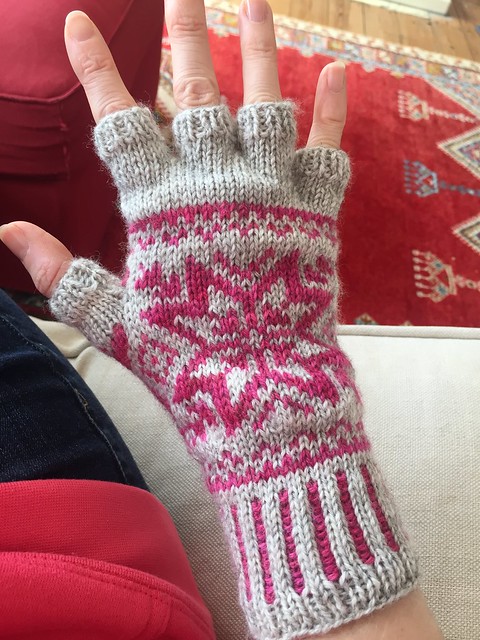 On the plus side – I love this yarn (Ysolda’s Blend No 1) and am sad that it’s not been continued. It’s warm and soft and robust all at once – perfect for gloves. And the pattern is pretty and clever – just creates a shape that it turns out I don’t like!

The reason for casting these on, by the way, was due to me being inspired by Knit British’s Good Intentions club. More on that soon – I have a whole bunch of patterns+stash paired up and ready to go over the next year (perfect timing given my current yarn ban) and I’m looking forward to sharing those with you.