This hat is something special. This hat is the very first hat I’ve knitted for myself that I totally like as much on completion as I did in anticipation beforehand. I’ve tried a few in my time (Gretel and Brimming with Style and my ill-fated French beret, way back when) and none has been very satisfactory when finished. But I love love LOVE Birstwith.

The pattern is one of the many excellent ones from Rachel Coopey‘s Coop Knits Toasty Vol 2. I picked it up at last year’s Pom Pom Quarterly Christmas do, which featured a small and select group of indie stalls. In fact, I saw some samples of her hats across the room and zoomed right in because they were so perfect, and after trying some on felt it was only fair to buy one of her books. 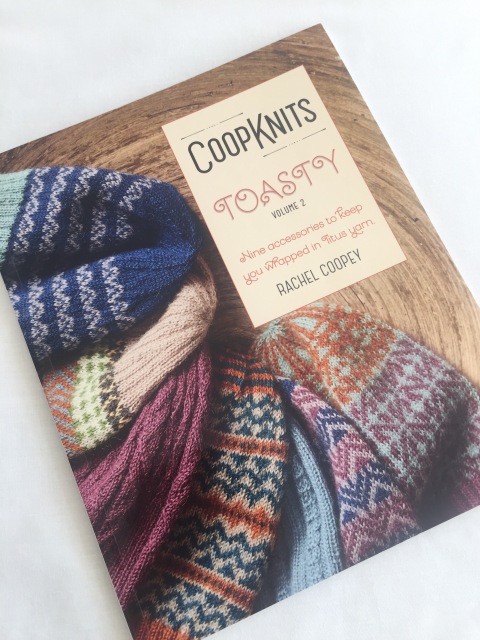 The yarn is one third a gift from my friend Fiona, and two thirds bought at Unravel in February. Fiona’s skein is a blue-grey so I spent a good 15 minutes holding other ones up to it to find the right colour palette. It’s all baa ram ewe Titus, which is the author’s preferred yarn, and three skeins is absolutely tonnes – I could knit three more of these if I wanted to (I may not make this exact hat again, but I’ll def’ make something else from the book).

The finished project is a wee bit scratchy but softens up with wear, and it’s both light and warm. And the making of this was a lot of fun – it’s been an age since I did a stranded project and a stranded hat provides the perfect amount of interest and speed. And it has a BOBBLE*. The pattern says the bobble is optional but, let’s be honest, it would be much the poorer without one. Bobble love (WordPress won’t let me put a heart symbol here, but picture it).

* I have inadvertently typed ‘booble’ instead of bobble several times while writing this post and it’s still making me giggle.